Answering the Call for Scores - Practical Notes for Composers

I've been busy going through submissions of new works received through the Northwest Symphony Orchestra’s Call for Scores. It would be quite impossible to give each composer personalized feedback, so here I answer the call for scores with some practical notes for composers.

I prefer transposed scores, the ones NOT in C. According to the Music Arrangers website


“In the transposed score the focus is on the language of the player, the parts are written as the player reads them.”

It is perhaps a bit old school, but I want to know what the player is playing. From the looks of what I have seen from many composers, I suspect many people are composing at the piano, without regard for what the players will be doing with their bow arm, fingers, breath, lips, reed, etc. When you assign a note to an instrument, do you know what you are asking the player to do?
Yes, as a composer you have the ‘right’ to write whatsoever you wish, and ask players to do whatever you wish.

However, just as in theater and film production, there is good casting and bad casting.

If you have a passage that makes huge leaps all over place, consider assigning it to a wind instrument, clarinets perhaps. I see quite a bit of big leaps in the string parts. Violins like little motifs that move within the span of four fingers, doodling back and forth, or chromatic lines. Celli do well with intervals of a third. Large swaying leaps work well on a keyboard, but are out of character for most string instruments. If you want the violins to do that, perhaps your piece should be for string quartet. One virtuoso player can present those leaps with more integrity than a whole string section.

This calls in the idea of “thread count.” One violinist on a line is much different than 5 or 15 players all speaking the same line. Such big swings played by a higher thread count will loose clarity and edge, and almost look comical.

Another keyboard-ism is the repeated chord.

It is pianistic to repeat chords in order to sustain the sound, carry the harmonies over time, and fill texture. Schubert does this brilliantly in his Erkonig. Orchestral writing, however, easily creates a sustained sound through held notes, keeps the ear interested through the use of vibrato, and develops texture over time.

If you need to create those repeated, pulsing chords, however, consider this technique.

Dovetail the repeated notes. The result removes any sense of stuttering and makes for a much more coherent, flowing sound.


The keyboard and the orchestra are very different, please treat them differently.

Also, please note that sharps and flats are quite different. For most orchestral instruments an A-sharp differs from a B-flat. Where the note sits will be subtly different; there is also a psychological difference, too. A passage consisting of numerous flats has a different feel and character from one with numerous sharps, even though it may be an exact enharmonic version. It may be all the same to someone composing or playing at a keyboard, but you set up definite context with your choice of notes.

Is different than Version 2

And different than Version 3

The context, not just the pitch name, changes.

Grasping ideas with the eye – this is important. Even though I know that as a composer you may have a very specific visual sense as to how a piece should look, be aware how this affects the performer. The faster any musician can grasp your musical material, the better.


You want players to spend more time polishing your musical message than trying to figure out what in the world you ask of them.

I’m seeing quite a few scores where I think the composer is trying to be “key-less.” From appearance all the parts are written in C (no sharps of flats) rather than commit to any  key. The result is an ad hoc combination of sharps and flats, not to mention a score and parts which are awkward to read. I understand that a modern composer would want to shape music without key signatures, yet the notation gets messy.

For example, this is what a composer* wrote:

(*exact notes and rhythms have been changed to protect the composer’s identify.)

In this original version the composer makes it unnecessarily difficult for the player’s eye to grasp the passage or motif as an idea within a context. There is a randomness which makes it feel sequentially detached, like reading a text without punctuation or without space between words. Yes, you may write this way, but your works may lack conviction from your players.

This option would work better, especially for most wind players.

This option works better for most string players.

The original version is unnecessarily chaotic.

Realize that the player will need to remember for the duration of the measure, all the accidentals that have already happened. It is very unusual and odd to remember a mix of sharps and flats.  Again, you can write what you wish, but there is already so much standing between your work of art and it ever being played, practiced, performed for an audience and understood.


Do your work a favor and produce a reader-friendly copy.

Another notation issue that can waste rehearsal time is beams and stems of notes. This type of notation brings music-reading to a halt.

- whereas this is instantly graspable.

In terms of orchestration, the doubling of parts at an octave and unison is another issue which is often weak. Depending on the instruments, when one line suddenly moves into parallel octaves or in unison with another, the result is as if one line has dropped out. There is a sudden weakness rather than a thickening of sound. Violas and celli an octave apart sound empty. The violas in unison with violins add weight; but the violas an octave lower than violins add darkness.


Know which notes tend to be ‘wolf tones,’ which are brittle or dull, or a bit unwieldy.

Do you know what this note will be like for the bassoon player? 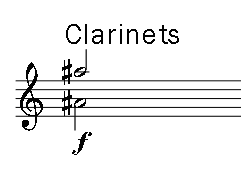 To make this clarinet combination sound OK you’ll need to trust the conductor or players to make it work. First, know these aren't the most pleasant pitches, being throat tones. Second, writing for clarinets at the octave creates some funky intonation issues. Good players or a word from the conductor will get the dynamics re-balanced so the tuning sits right. Better, however, would be to use good character casting and avoid clarinets in octaves. (in fifths and fourths, too.) These intervals suit other instruments much better.

I’m surprised to see dynamics still added to scores en masse in the style of the 18th century. Granted, a good conductor will re-finesse your dynamics, re-stack your chords, and re-pace your crescendo or decrescendo, but if you as the composer know what needs to be done in order to achieve the gesture you seek, why not obtain the skills to notate this? Here are some general crescendo/decrescendo concepts. Crescendi start from the lowest notes. Once the high voices add their force, the crescendo won’t appear to grow any more. (Organists know this well.) The reverse, of course, works for the decrescendo. The high notes need to lessen in energy first, before the listener will agree to hear a convincing decrescendo.

Also, be aware that for a player, it is very easy to join in and play louder because you hear everyone else getting louder. With decrescendi, however, it is very difficult to notice when others are beginning to play quieter than yourself. The conductor will help with this, but a well-notated decrescendo is a plus.

Tempi for the piano differ from tempi for the orchestra because tempo is more than just a quota of time. I’d love for composers to dig deeper into the world of time and time perception. How do composers create sensations of time? What are your tools for shaping and manipulating time? What is your preferred manner for relating to time, both as a human being and as a composer? How are you asking the players and listeners to relate to time?

First, consider that in general, 52 beats per minute is the lower threshold for a conductor to beat. (Although triple meters are easier to conduct at a lower tempo than duple meters.) So this notation:

Will be seen and heard as this:

There are ways to create stillness, or slowness; using a slow tempo marking is only part of the effect. Also, be aware that tempo affects color and texture, too.


Tempo and time are two different concepts and experiences.

Some further tips for seeing your music received well:

Please include rehearsal markings in your score and parts. Measure numbers alone are useless should conductor and players ever need to quickly confirm a place in the music.

Comb bindings – at least for the conductor – should be a size or two larger than usual. This allows for turning the pages without tearing the paper and, perhaps more importantly, turning pages quietly.

When given a choice of notation for rests, I prefer showing the smaller unit rather than a large unit. A player will experience Version 1 differently from Version 2:

You would want the players to be thinking the first version.


Thinking like a player will help you choose notation that benefits the performance.

I personally go so far as to write out measures, which I know players will tend rush, with more space between the notes. I stretch the formatting to give the illusion of there being sufficient time (space) between notes, so there is less chance of rushing.

I also prefer to cue all my parts. This way no player is off in a separate realm of sitting and counting. Everyone is involved with the occurring notes and music. As a composer this also gives me a chance to prepare the performer with a specific line, instrument, or pitch that I want the player to be hearing in their head before entering with their notes. Not all conductors will convey this type of information to the players, so the more you can use notation to quicken the preparation of a piece, the better.

There’s much more, of course, to the art of communication through sound and time; I’m still learning, too.

But knowing your instruments and thinking like the performer will improve the welcome your work receives. If we don't choose your work this year, consider these practical notes for composers, and I welcome your submission next year!


And finally, please refrain from imitating Wagner and writing 9-note chords for the harpist.

A Message in a Bottle - for a Young Artist

You have a gift. They call it “a gift” - now it remains separate from you. How can you say “I am a gift” - even Plato would compl...